A waste management and packing company has been fined after a worker was struck by a falling bale of compacted wastepaper. 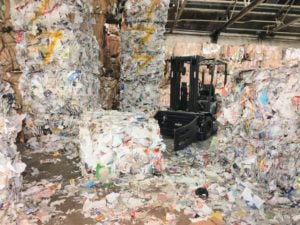 An employee of Recycled Packaging Ltd was seriously injured in a warehouse in Hillington, Glasgow, in December 2016 when he was struck by a falling bale of paper which weighed approximately 500kg, becoming trapped beneath it.

Investigating, the HSE identified that the method of storing bales was unsuitable and bales were stacked in single columns up to five high with no support or ‘tying in’ to aid stability. The investigation also found that the practice of removing contamination from bales by hand created voids in lower bales contributing to the risk of stack instability.

Recycled Packaging Ltd of Muriel Street, Barrhead pleaded guilty to breaching Section 2(1) of the Health and Safety at Work etc Act 1974 and was fined £20,000.

Speaking after the hearing, HSE Inspector Jane Scott said: “In the waste and recycling sector the risks associated with falling objects are well known. This incident could easily have been avoided by providing a segregated workspace for operatives to clean bales before they are stacked and safe bale stacking procedures.”