A company that manufactures and supplies artificial trees has been fined £40,000 after one of its staff fell five metres from a ladder and suffered serious injuries while trying to retrieve stock.

The injured man was an employee of Treelocate (Europe) Limited, based in Northumberland, and was gathering products stored in boxes on shelf racking up to four bays high.

Newcastle Magistrates’ Court heard that Treelocate staff would use a ladder to climb to height, then dismount the ladder to access stock on the racking. During this specific incident, the employee slipped from the ladder as he was remounting while carrying stock and fell approximately five metres, striking his head on a pallet and sustaining a head injury.

An investigation by the Health and Safety Executive (HSE) found that Treelocate (Europe) Limited had failed to properly plan the work, and had failed to ensure there was safe access to the area and that measures were taken to prevent and/or mitigate a fall from height. Treelocate pleaded guilty to breaching section 4(1) of the Work at Height Regulations and was fined £40,000 with £1,620 costs. 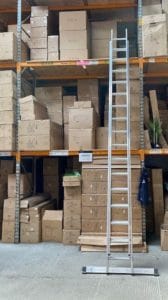 ‘Work at height is the biggest cause of workplace death in the UK, which is why HSE takes it so seriously. In this case, the injured person had been working for Treelocate for a few years and his role was to retrieve stock.

‘Staff mainly used ladders to collect the stock for despatch. There was a forklift on site and a telehandler. But there were parts of the warehouse that those bits of equipment couldn’t access and, due to rapid expansion, stock had started being stored higher and higher. Also, stock wasn’t put on pallets, so even if the forklift could access it, it wouldn’t have been able to bring the stock down.

‘On this occasion, the employee put the ladder on the front of the rack, climbed off the ladder at height to retrieve stock, and when he was climbing back onto the ladder with the stock, the ladder slipped.

‘So there was just the square front of a racking system, nobody else was holding the ladder and there was no footing plate. It was just a plain metal extendable ladder that was resting against the racks and it slipped as he turned to come back on it.’

Phil said that a better system of work would have removed the need for staff to retrieve much of the stock by ladder, significantly reducing the risk they faced.

‘I would have expected somewhere like this to put the boxes of stock on a pallet, wrap them up, and then when needed, they could be brought down with the forklift truck. That way workers could stay at ground level,’ Phil said.

‘If that wasn’t possible because of the design of the building or the work needed, we’d expect a scissor lift or even airport-style stairs where there is a fixed guardrail around the worker. With that, staff wouldn’t have to climb onto any racks and they can reach out to get the stock needed and come down safely.

‘Although the employee suffered serious injury, it actually could have been a lot worse. A pallet of stock below him helped to break his fall a little, otherwise he would have fallen nearly five metres onto a concrete floor.’