An architectural metalwork company has been fined after an employee suffered a serious hand injury on a pedestal drill. 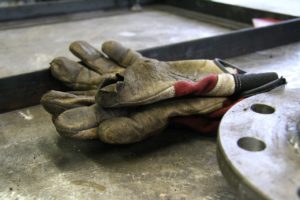 On 21 August 2018, an employee, who was an apprentice, at Viking Engineering (Architectural Metalwork) Ltd, suffered an amputation injury to his right-hand middle finger whilst operating a pedestal drill at the company site in Basford, Nottingham. His gloved right hand became entangled on the rotating spade drill bit of the drilling machine resulting in his injuries.

The HSE’s investigation found that employees were required, by the company’s written system of work, to wear gloves when operating the drill. It had become custom and practice to leave the drill running while repositioning workpieces, which is when the incident occurred.

Viking engineering (Architectural Metalwork) Ltd of Park Lane, Basford, Nottingham, were found guilty of breaching Section 2(1) of the Health and Safety at Work etc Act 1974. The company was fined, in its absence, £78,000 and ordered to pay costs of £3,914.48 with a victim surcharge charge of £170.

← Restaurant fined £175,000 after oven blew up in chef’s faceContract manager jailed after employee fell to his death →
Scroll To Top