A steel company has been fined £1.8m after an explosion killed two men. 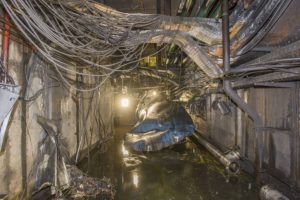 Celsa pleaded guilty to failing to make a risk assessment before the blast at its Cardiff plant in November 2015. Peter O’Brien, 51, from Llanishen, Cardiff and Mark Sim, 41, of Caldicot, Monmouthshire, both died following the incident.

The company apologised “for the shortcomings which contributed to the most tragic event in our history”.

At Cardiff Crown Court, a judge said the steelworks looked “like a bomb site” after the blast.

A safety mechanism failed to shut down a heater which got too hot and then exploded, the court heard. Five other men were also injured in the blast at the plant in Splott, Cardiff. Worker Darren Wood was seriously injured.

Other workers who heard the explosion tried to go to their colleagues’ aid but were met with intense fires and smoke preventing them from getting to the cellar.

The court was told the workers were probably unaware the oil levels in the tank had dropped below the minimum safety level as the oil heater, which was still switched on, would have turned off but for an electrical failure.

Mr O’Brien’s wife Marie said: “No person should ever go to their place of work and not return.This was a preventable accident, he was torn away from us so suddenly and cruelly and no sentence will ever be enough for our loss.

“We will always love and miss Peter very much, but we need to find some closure now.”

Mr Sim’s wife Samantha described her husband’s death as “the most traumatic experience I have ever dealt with”.

“He has left a huge void in our hearts and our lives, a void people say heals in time but I believe it never truly heals, we just learn to live our lives differently.”

Celsa admitted failing to make a suitable and sufficient assessment of risks under the Health and Safety at Work etc Act.

Little or no training

Richard Bowen, the factory’s Health and Safety Manager, said some employees had “little or no training” on risk assessments, and Celsa had not put in place steps to make sure workers carried them out.

Judge Neil Bidder said Spanish-owned firm Celsa had “failed to ensure” the machinery was safe, adding: “The company failed to make suitable and sufficient assessment of risks. A huge explosion occurred, bursting into pieces the large metal accumulator. Photographs of the scene shown to me are reminiscent of a bomb site.”

He said the risk of explosion “could and should have been recognised”.

“If the job being done by Mr O’Brien and Mr Sim had been properly risk assessed, I am sure that this accident would not have occurred and that they would not have been killed and Mr Wood seriously injured.”

Civil proceedings between the families and Celsa were said to be in progress.

Richard Matthews, defending Celsa, said the company accepted it had failed to identify risk of explosion when the oil tank was drained, saying: “It was the cause of this tragedy and cause of these men’s deaths, and the cause of the suffering and incalculable pain that has resulted.

“We underline that nothing that occurred was as result of any failure or error or mistake of any sort on the men’s part.”

A spokesperson for Celsa said: “Whilst nothing we can do will ever bring Mark and Peter back, our thoughts and deepest sympathies remain with those closest to them. The loss of two friends and colleagues will always be felt deeply by the whole Celsa family.

“We have left no stone unturned to ensure that nothing like this could ever happen again. All of us work incredibly hard every day to prioritise the safety of every single colleague.”

The prosecution was brought by the HSE and a second charge of breaches of health and safety laws will lie on file.

Celsa UK employs more than 500 people and produces 1.2 million tonnes of steel each year from scrap.