A fire at a care home which left two people dead – with a further 33 having to be rescued from the collapsing building – was found to be caused by an electrical fault that spread to the roof. The company running the home has been fined £175,000 for five fire safety breaches. 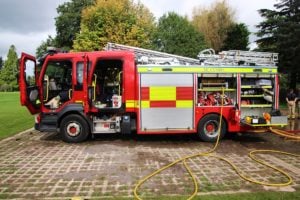 Ivy Spriggs, 91, and Daphne Holloway, 88, died in the blaze at Newgrange Care Home in Cheshunt, Hertfordshire, on 8 April 2017.

Newgrange of Cheshunt Ltd runs the home and admitted five charges of failing to comply with fire safety legislation.

Speaking after the sentencing at St Albans Crown Court, Hertfordshire’s Chief Fire Officer Darryl Keen said: “This incident highlights the need for all business owners to ensure they fully comply with fire safety legislation. If enough competent staff had been present and properly trained to carry out long-established and recognised guidance on evacuations in a care home I am sure that a full evacuation would have been started long before our arrival.

“Evacuation of a care home is a difficult task and needs to be properly considered and practised so that everyone can escape unharmed.”

The fire service has since undertaken further inspections of the county’s care homes, according to a spokesman for Hertfordshire County Council, which runs the fire service.

According to BBC reports, the council commented that the amount of prosecution costs the company will have to pay is to be negotiated.