A Director of a construction company has been sentenced after the partial collapse of a building during roofing work. 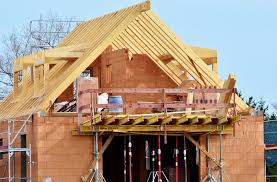 On 24 February 2016, Jason Lycett, a Director of Brooke Ren Limited, the Principle Contractor, was responsible for constructing two, two storey blocks of flats at Church Street, Jump, Barnsley following the demolition of a former public house. Timber roof structures had been constructed for each block but had not been tiled in their entirety.

Three roofers had been working on the roof of Block B, transferring tiles from ground level using a tile hoist and distributing the tiles over the surface of the roof, when the tile hoist broke down. Two roofers had alighted the roof and a third was descending a ladder from a scaffold when the roof structure collapsed, demolishing a small wall at eaves level and distorting the scaffold. There were no injuries; however, had it not been for the breakdown of the tile hoist, the workers would have been on the roof at the time of its collapse.

Investigating, the HSE found that the company had been informed during the pre-construction phase that the roof structure needed to be designed by a specialist, but this did not happen until after the incident. At the time of the collapse, the structure was not able to withstand the loads which had been applied to it.

Brook Ren Limited pled guilty to an offence under Regulation 19 (1) of the Construction (Design and Management) Regulations 2015 and Jason Lycett of 289A Manchester Road, Millhouse Green, Sheffield, a Director, was found guilty of breaching Section 37 (1) of the Health and Safety at Work etc Act 1974 and has been fined £30,000 with £7,026.58 in costs.

Speaking after the hearing, HSE Inspector Alan Sheldon said: “Principal Contractors have an important role in managing health and safety risks during the construction phase, so they must have the skills, knowledge, experience and, where relevant, organisational capability to carry out this work.

“Where Directors are found to be negligent in carrying out their roles, they too may face legal proceedings associated with the same health and safety management failings. Although there were no injuries, matters could have been very different had the workers still been on the roof at the time of its collapse.”