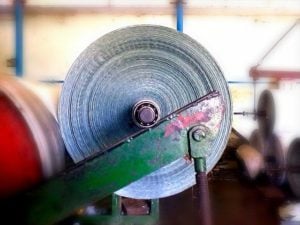 On 16 March 2017, an employee of De La Rue International Limited was helping colleagues to remove paper from the machine by standing in the gap between the size press and the after-dryer section of the machine in Bathford Paper Mill in Bathford, Bath. After a fixed guard was opened, the employee expected the spar drum to come towards him (clockwise), however, by the time he realised the cylinder was turning in the opposite direction (anti-clockwise), the spar drum had turned and his head became trapped between a spar and the base of the fixed guard.

The HSE’s investigation found that De La Rue International Limited had not provided a safe system of work for the removal of broken paper from the after-dryer section of the paper-making machine when the machinery was operated in reverse.

Speaking after the hearing, HSE inspector Tania Nickson said: “Those in control of work have a responsibility to devise safe methods of working and to provide the necessary information, instruction and training to their workers in the safe system of working.

“If a suitable safe system of work had been in place prior to the incident, the life changing injuries sustained by the employee could have been prevented.”