A meat processing firm has been fined after two workers had their fingers amputated by machines. 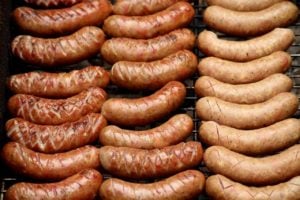 A 37-year-old employee was working on the Lorne sausage processing line at what was then the Halls of Scotland factory on Glenburn Road, Prestwick.

He tried to clear a blockage by pushing the meat down into the mincer but lost part of his finger when it came into contact with the moving machinery. The incident happened on 22 August 2016.

In a separate incident on 7 January 2019, with the factory now run by Browns Manufacturing Limited, a 22-year-old was mixing meat for cocktail sausages. He was moving it to the next machine in the process when he reached through a gap and got his hand caught in the revolving mixer. He was taken to hospital and his middle finger had to be amputated. The worker had to have physiotherapy and counselling for persistent nightmares after the incident.

The company pleaded guilty to failing to ensure the dangerous parts of the machinery were inaccessible and not providing training for their staff in a hearing at Hamilton Sheriff Court on 3 July 2020.

In both cases, the workers were not given sufficient training and safety measures were not in place. The company has since made changes to both machines and updated their training procedures.

Alistair Duncan, Head of the Health and Safety Investigation Unit, said: “Both of these workers were left permanently disfigured by incidents that were foreseeable and easily avoided.

“Since these incidents, the company has installed guards and interlocks on these machines, as well as improved their training.

“Hopefully this prosecution and the sentence will remind employers that failure to fulfil their obligations can have serious consequences.”