The former firefighter who carried out fire risk assessments (FRAs) on Grenfell Tower between 2010 and 2017 has admitted that he misrepresented his qualifications and experience.

At the public inquiry into the June 2017 disaster, Carl Stokes also admitted he had cut and pasted large chunks of text from one FRA to the next.

Stokes, who ran CS Stokes and Associates as a sole trader, also calculated that it took just eight hours to visit Grenfell Tower  – which had 21 residential floors and three mixed-use storeys – and produce FRA reports running to 30-plus pages.

But Kensington and Chelsea Tenant Management Organisation (KCTMO) was also in the spotlight over lax controls when hiring Stokes in the first place, and its apparent failure to act on a highly critical report on fire risk management procedures by safety consultan 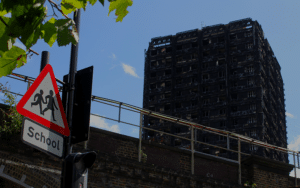 That report had common ground with later audits of KCTMO’s fire safety procedures, highlighting a lack of suitable policies and identifying 19 areas where author Steve Wain considered the TMO to be in statutory breach of fire safety legislation.

The inquiry heard how Stokes built his knowledge of fire safety over three decades as a firefighter at Berkshire, then Oxfordshire Fire and Rescue Service (FRS).

In 2007, he undertook a two-day course on FRAs held by the Northern Ireland Fire Safety Panel and delivered by consultancy CS Todd Associates. This qualified him to become an auditing officer at Oxfordshire FRS, reviewing buildings and FRAs selected for spot-check audits.

After retiring from the FRS, he set up CS Stokes and Associates to carry out FRAs for clients. As well as the two-day course, he held a diploma from the Confederation of Fire Protection Associations of Europe, also gained in the FRS after completing eight study units.

In September 2009, Stokes was offered a role as a subcontractor to Berkshire-based fire safety consultancy Salvus, working there for around six months. When his CV claimed that he had undertaken FRAs on high-rise blocks, he had in fact only audited others’ work.

One Salvus client was KCTMO, and Stokes was sent to carry out an FRA on Grenfell Tower on its behalf in September 2009. But the TMO subsequently put the works out to tender, inviting Stokes to submit a bid in June 2010.

Similar wording was reproduced by Stokes on the various FRAs he later produced for the TMO.

He was asked directly if he had formulated this statement to mislead readers over his professional qualifications. Richard Millett QC, leading counsel for the inquiry, added: ‘And is it fair to say that you wanted to create that impression in order to improve your prospects of winning the tender?’

Stokes answered: ‘They are my courses I have attended and exams I have passed to get those courses.’

He denied that he had intended ‘Fire Eng (FPA)’ or ‘FIA BS 5839 System Designer’ to be read as ‘post-nominal’ qualifications, insisting several times that he was unaware of the significance of post-nominals and saying that he had simply listed courses that he had attended.

When Millett put it to him that ‘Fire Eng (FPA)’ – relating to the CFPA diploma – might suggest that he was a qualified fire engineer, Stokes said he would have corrected anyone who had that impression.

Counsel responded: ‘Yes, but those who didn’t ask you would be left with that uncorrected impression, wouldn’t they?’

Stokes said: ‘In hindsight, sir, I see where you’re coming from.’

But the questioning also shone a light on KCTMO’s procurement practices. According to the tender document, KCTMO’s terms and conditions for consultant appointments required them ‘to satisfy the provisions of a quality management system as set out in BS EN ISO 9001 and preferably be registered to a UKAS certification body’.

When Stokes was questioned on this point he said: ‘I don’t think it ever came up, sir.’

While the tender document stated that the appointment was for one year and would then be reviewed, no reviews took place and the arrangement simply rolled forward.

The inquiry also heard that KCTMO received a ‘risk management report’ from Salvus in September 2009, assessing its overall approach to fire risk management. This identified 19 statutory breaches that required action within six months.

In October 2010, when Stokes had been appointed by KCTMO, his contact there sent him the September 2009 report by email without any assurances that the failings had been actioned.

Although fire risk management policy fell within Stokes’ responsibilities as a fire risk assessor – according to PAS 79 – there was no record of Stokes following up on the email.

His witness statement reports that he charged according to the size band of the property, with Grenfell Tower in the ‘large’ category. ‘Thus when carrying out FRAs at the tower, I initially charged £410 plus VAT for new FRAs and £320 plus VAT for FRA reviews.’

Giving evidence, Stokes said that the typical workload to produce an FRA for Grenfell Tower was just eight hours – four to visit the tower and four to write up a report.

FLAVOUR OF THE MONTH

In the second of two evidence statements, Stokes listed every training course on fire safety and health and safety he had attended; after setting up as a fire risk assessor, he attended CPD sessions organised by Barbour, the CPD Certification Service, BM Trada, Colt International and others.

Asked how he had ‘self-selected’ CPD training courses, he said he sometimes chose events on topics that were ‘flavour of the month’.

During his evidence, Stokes stressed that his role, and the FRAs he produced, were defined by the Fire Safety Order 2005, so related only to the common parts of residential blocks, excluding the external facade.

He also argued that it was not his responsibility to ‘chase up’ action points raised in his FRAs, instead waiting until the next FRA to review progress; some of these no doubt joined the backlog that – the inquiry previously heard – the KCTMO struggled to clear between 2013 and 2017.

The hearing also heard that Stokes had direct knowledge of a major overseas cladding-related fire. During a holiday in 2015, he had visited Dubai’s residential Torch Tower, which had its upper floors damaged in a blaze in February of that year. He also attended training sessions on fires involved in insulated core panels, and on how external spread of fire was covered in the Building Regulations.

However, Stokes told the inquiry that he did not consider himself to be part of the refurbishment project team, as his contractual appointment only covered periodic visits to carry out FRAs.

But given that he carried out two FRAs at Grenfell while the refurbishment works were underway, and had been drawn into numerous discussions about the works, he acknowledged that he had been involved to some extent.

In his witness statement, he wrote that he had been satisfied that the works complied with Building Regulations: ‘In short, my view was that if the design was approved by Building Control (having been produced and considered by various specialist professionals, including those listed at paragraph 77), then the design must be compliant with the functional requirements of the Building Regulations and Approved Document B.’