A fire that completely destroyed a Derbyshire school was most likely caused by hot works taking place during a refurbishment project, prompting calls for thermal imaging and hot work training for construction workers.

Firefighters were called to the accidental blaze at Harrington Junior School in Long Eaton on 28 May 2020. Crews from across Derbyshire, Nottinghamshire and Leicestershire attended the scene and worked throughout the night, with two firefighters sustaining minor injuries.

Group manager Dean Gazzard, who was the Officer in charge at the fire said: “Workers carrying out the refurbishment of the school did everything they could to contain the fire and prevent its spread before the arrival of firefighters. Fire crews worked in extreme heat and challenging conditions, but despite everyone’s efforts, the school was totally destroyed by the rapidly spreading fire.”

Kumu Kumar, Head of Risk Engineering at insurance firm Zurich, said: “As the recent blaze that destroyed Harrington Junior School in Long Eaton highlights, hot work remains a constant threat, and more action is needed to tackle the problem. Although the construction industry has well-established safeguards in place, hot work fires are continuing to break out with alarming regularity.

“A combination of approaches – including the use of thermal imaging cameras and hot work training – could help to dramatically reduce the frequency of hot work fires. Costing as little as £400, the devices could prevent millions of pounds worth of damage and reduce the costly impact on local communities.” 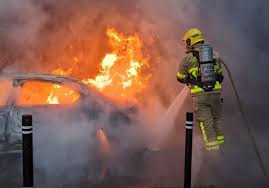 The landlord of a Derby house where a man died in a fire has admitted to putting his tenants at risk of death by not having adequate safety measures in place. Allah Ditta pleaded guilty to three counts of breaching fire regulations when he appeared remotely at Derby Crown Court from his solicitor’s office.

They included him having a front escape route which was locked when it should have been open and a rear escape route that led directly into an enclosed garden. He also admitted to not having taken a suitable risk assessment that the people living there would be put in danger of death or serious harm should a blaze break out.

The 63-year-old, of South Avenue, Littleover, has been prosecuted by Derbyshire Fire and Rescue Service and is not facing any criminal charges such as murder or manslaughter, Judge Shaun Smith QC told the hearing.

Ditta has been handed conditional bail and both the prosecution and defence teams asked for time to prepare papers before sentencing takes place. The probation services is set to investigate whether any attached punishment to a suspended sentence order will be carried out.

Firefighters were called to the property, in Harriet Street, Normanton, shortly after 6.30pm on 9 March 2018. It remained closed to traffic for three hours as crews tackled the flames.

Kulwinder Singh was unable to escape the blaze and the 36-year-old was later pronounced dead at the scene by Derbyshire Fire and Rescue Service. Two other men survived and were admitted to hospital.

Ditta is scheduled to be sentenced on 16 October.