A textiles manufacturer been fined after a worker was seriously injured when he was covered by hot dye and steam during a maintenance job at the company’s site in Alfreton, Derbyshire. 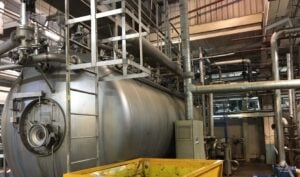 A maintenance worker was checking a fault on an industrial dye pressure vessel, used to dye long lengths of fabric, after steam had been seen coming from the main drain vent.  A valve was slightly open and air lines were removed and replaced in incorrect positions, which caused the valve to instantly open releasing 6,000 litres of hot dye liquor. The employee suffered 20% burns to his body including both arms, legs and buttocks. The incident happened on 4 June 2019.

The HSE’s investigation found that:

Guilford Europe Ltd of Cotes Park Industrial Estate, Somercotes, Alfreton, Derbyshire pleaded guilty of breaching Section 2(1) of the Health and Safety at Work Act 1974 and were fined £100,000 with £3,751.60 in costs.

Speaking after the hearing, HSE Inspector Leigh Stanley, said: “Those in control of work have a responsibility to devise safe methods of working and to provide the necessary information, instruction and training to their workers. If a suitable safe system of work had been in place prior to the incident, the life changing injuries sustained by the employee could have been prevented.”