A Co Tyrone company has been fined £150,000 for failings which resulted in the death of one of its employees at its premises on Killyclogher Road, Omagh. 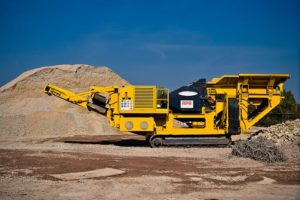 Terex GB Ltd pleaded guilty after their employee, Mr Steven McTeague, sustained fatal injuries as a result of being crushed between two mobile stone crushing machines which were stored along with others in a stockyard area.

Mr McTeague had been tasked with moving one of the machines, using a handheld controller, from its parked position in the stockyard. During this operation the front of the machine veered towards a neighbouring parked machine, causing Mr McTeague to become trapped. Mr McTeague sustained fatal crush injuries to his chest.

HSENI Inspector Kyle Carrick said: “Our thoughts are with the McTeague family. Steven’s tragic death could easily have been avoided if his employer had properly considered the risks associated with the movement of mobile plant within the stockyard.

“Risk assessment is a relatively straightforward process. It simply involves identifying the risks and putting measures in place to manage them. In this case careful consideration as to the layout of the stockyard would have gone some way to preventing this tragic incident from occurring.