Moy Park, a poultry-processing company has been fined after a yardman had his leg amputated when he was hit by a forklift truck. 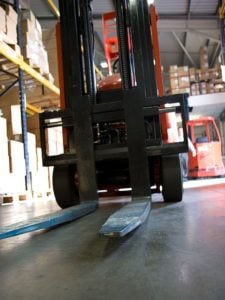 A forklift truck had been driven into the yard at Airfield Industrial Estate in Ashbourne to drop off some pallets, when the driver reversed around a trailer. Derby Crown Court heard how, on 24 January 2017, a yardman, unaware that the forklift was reversing, was standing behind the trailer and wasn’t seen by the driver. The forklift hit the yardman causing serious leg injuries, which resulted in his left leg being amputated above the knee.

The HSE’s investigation discovered that there was an inadequate system of segregation in the yard to separate people and vehicles to prevent this type of incident occurring. In the time following the incident, measures have been put in place so that the yardman is segregated from forklift trucks when they are operating in the yard.

Moy Park of The Food Park, 39 Seagoe Industrial Estate, Craigavon pleaded guilty to breaching Regulation 17 of the Workplace (Health Safety and Welfare) Regulations 1992. The company was fined £866,650 and ordered to pay costs of £11,651.61

Speaking after the hearing Inspector Lindsay Bentley said: “The employee’s injuries were life-changing and he could have easily been killed. This serious incident with devastating injuries could have been avoided if basic precautions had been put in place.”