A quarry operator has been fined after failing to keep fixed guards in place on moving machinery, causing serious injuries to an employee’s arm. 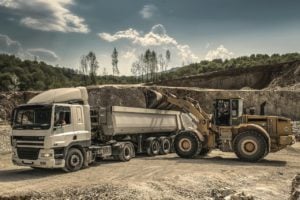 On 9 December 2016, a new employee of Tudor Griffiths Limited was injured on his first day working at the quarry. His arm got caught and dragged into the ‘nip point’ between the conveyor belt and rotating tail drum. The worker needed multiple skin graft operations and has been left with permanent scarring on his arm.

The HSE’s investigation found the company had failed to ensure that the fixed guards were effective to prevent access to dangerous parts of machinery, despite this risk having been identified several months before the incident.

Speaking after the hearing, HSE Inspector Simon Edwards said “This could have easily been prevented and the risk should have been identified.

“Entanglement in conveyor systems is a significant cause of serious incidents in the quarry industry. Quarry operators should make sure they properly assess and apply effective control measures to minimise the risk from dangerous parts of machinery.”