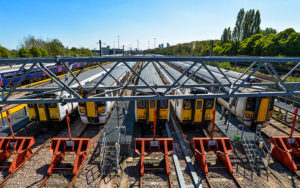 Two recommendations have been made after a driver was crushed between two trains during a ‘coupling’ operation in December 2019.

The investigation revealed that the driver became trapped because he was passing between two closely-spaced trains when one of the trains was moved towards the other as part of a coupling operation. He had not used a safe route when he was walking within the yard, and almost certainly did not expect that the trains would move as he passed between them.

Another driver, who was attempting to couple the trains, was unaware that anyone else was close to them. He did not sound a warning prior to coupling because local instructions did not require this.

Investigators identified that the depot operator, West Midlands Trains, had not adequately considered the risks faced by drivers on depots. The investigation also found that Tyseley depot was operating at or beyond its capacity at night and that West Midlands Trains’ management assurance processes had not promoted safe working practices.

The RAIB has made two recommendations as a result of the investigation, both addressed to West Midlands Trains. The first is that the company ensures that effective assessments are carried out of the risks to those walking and working in depots, yards and sidings and that suitable measures are in place to control these risks.

The second recommendation is that West Midlands Trains reviews its safety assurance processes to ensure that unsafe working practices within the company can be effectively identified and their causes addressed.

The investigation also identified six learning points for the railway industry. The first two learning points warn dutyholders and railway staff of the dangers of being in close proximity to railway vehicles.

The third reminds duty holders that authorised walking routes must be made known to staff, while the fourth reminds duty holders of the importance of assessing the capacity of depots relative to the operational demands placed on them to ensure that they can be operated safely.

The fifth learning point is that results from brake tests and other safety critical examinations are routinely checked and understood by competent staff, and finally the sixth point covers the importance of screening staff members involved in accidents for the presence of drugs or alcohol in accordance with the relevant procedures.