A Colchester tile manufacturing firm has been fined £10,000 after a worker suffered three broken bones in his arm and crush injuries to his forearm when he was drawn into the in-running nip of a conveyor tail drum. 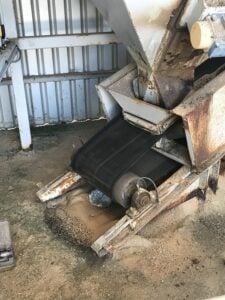 The Spartan Promenade Tiles worker was removing sand from the inside of a conveyor belt in an attempt to fix the machine, when his left glove became caught in the in-running nip of the conveyor tail drum, pulling his hand and arm into the machine. The emergency stop button in the building did not work, so a colleague had to run to alert the operator at the control panel in another building before the machine could be switched off, Chelmsford Magistrates’ Court was told.

The incident happened at the firm’s site on Slough Lane, Colchester, on 18 February 2019.

The HSE’s investigation discovered that the company failed to suitably assess the risks, implement a safe system of work, and control the risks. Employees were not trained in the use of isolation or lock off procedures for the machinery on site, nor were employees made aware that such procedures existed. There were no arrangements for the supervision or monitoring of employees to ensure they were correctly isolating and locking off machinery before completing maintenance tasks, and there was no functioning emergency stop in the vicinity of the conveyor tail drum. The guard on the conveyor tail drum had been removed and the conveyor was put into operation

Spartan Promenade Tiles Limited of Martells Industrial Estate, Colchester, Essex, pleaded guilty to breaching Section 2(1) of the Health and Safety at Work etc. Act 1974 and have been fined £10,000 and ordered to pay full costs.

After the hearing HSE Inspector Connor Stowers said “This injury could have been easily prevented and the risks should have been identified. Employers need to properly assess and apply effective control measures to minimise the risk from dangerous parts of machinery, and adequately train their workers to use isolation and lock off procedures if they carry out maintenance work.”