A waste and recycling company has been fined after an employee sustained serious injuries to his arm when it became entangled in the automatic roof sheeting mechanism of a visiting articulated truck. 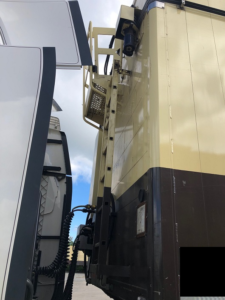 A 22-year-old labourer had been working at Johnsons Scrap Metal Limited, assisting in loading a 44-tonne articulated third party vehicle with waste wood, Liverpool Magistrates’ Court was told. He climbed onto the truck and while standing on the load, he manually levelled some wood that had prevented the automatic roof sheet from completely covering the load. As he was climbing back over the load to get down from the truck, the automatic sheeting device was inadvertently activated, trapping  the worker’s arm in the mechanism, resulting in injuries that included a broken arm, that later needed surgery to put two metal plates in place, and tendon damage. The incident happened on 24 April 2019.

The HSE’s investigation found that Johnsons Scrap Metal Limited failed to assess the risks in relation to vehicles visiting the site and to take effective measures to prevent employees from accessing third party vehicles.  The company did not provide adequate information, instruction, training and supervision to employees and failed to implement risk control measures to ensure their safety when dealing with third party vehicles.

Johnsons Scrap Metal Limited of Crowland Street, Southport, Merseyside, pleaded guilty to breaching section 2(1) of the Health and Safety at Work etc. Act 1974. The company was fined £10,000 and ordered to pay costs of £4,000.

HSE Inspector Emily Osborne said after the hearing, “This incident and the resulting injury was entirely preventable had the risk in relation to visiting vehicles been assessed and suitable control measures put in place.  Those in control of a workplace have a responsibility to identify and devise safe methods of working, and to provide the necessary information, instruction and training to their workers.”