One of the core terminals of Peel Ports London Medway, Port of Sheerness Limited, has been fined following an incident where an employee was seriously injured by a clamp truck.

An employee was hit by a five-tonne clamp truck in a paper reel shed on the Sheerness Port on 28 October 2018. The employee sustained an open leg fracture and was knocked unconscious. He was subsequently airlifted to hospital and had to have his leg amputated. 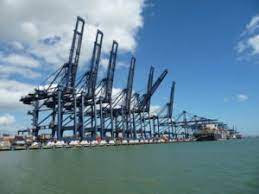 The HSE’s investigation into the incident found that the Port of Sheerness Limited failed to ensure pedestrians and vehicles could circulate and operate safely, putting the employee and others at significant risk. Supervisors were frequently working amongst five to six clamp trucks whilst undertaking the supervision of the paper reel unloads. It was found that there had been previous incidents where supervisors had been in close proximity of the vehicle operations on the port and had been hit by vehicles or product. Port of Sheerness Limited had only reviewed the immediate work relating to the incidents.

Port of Sheerness Limited of Sheerness Docks, Sheerness, Kent pleaded guilty to breaching Section 2 of the Health and Safety at Work Act 1974. They were fined £60,000 and ordered to pay costs of £10,886.

Speaking after the hearing, HSE Inspector Joanne Williams said: “This incident has resulted in life changing injuries in a wholly avoidable incident, caused by the failure of the company to identify the roles of the supervisors in the reel sheds and how the work was actually being undertaken.

“They did not learn from the previous incidents involving supervisors and lift trucks to review supervisory activities across the port. There is no excuse for companies that neglect this risk.

“Pedestrians, whether they are employees or not, should be kept separate from these types of vehicles through physical barriers or safe systems of work that are clear and well supervised.

“Every year many people are killed or seriously injured in incidents involving workplace transport, and there are significant risks associated with operating vehicles on ports, particularly when, as in this case, the vehicles have restricted visibility due to the lifting of large paper reels. These risks can be easily controlled using reasonably practicable precautions.”