A manufacturer of engineering products and components has been fined after a profile shed supervisor was struck by a bucket and its contents. 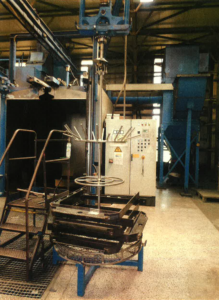 The incident happened on 4 May 2017, when a profile shed supervisor working for Nichol McKay Limited attended the automatic shot blaster to assist a colleague loading a number of components, weighing approximately 60kg each, into a suspended basket. There was no safety catch on the hooks used to hold the load to prevent it becoming detached. Having loaded a number of plates into one such basket, the basket (and its contents) fell from its attachment, striking the supervisor on the head, leaving him unconscious.

During an investigation by the HSE a Notice of Contravention and an Improvement Notice were served which required a review of the company’s management of lifting operations. The notice was complied with when the company confirmed a new lifting operations procedure and safe system of work.

Speaking after the hearing HSE Inspector Aileen Jardine said: “This incident could easily have been avoided by simply carrying out correct control measures and safe working practices.”