A construction company has been fined after two workers were injured when they fell through a ceiling at a site in Watford. 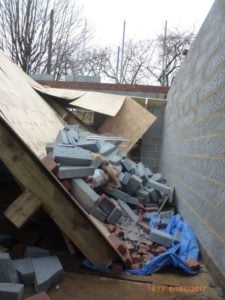 Luton Magistrates’ Court was told how, on 6 December 2017, four bricklayers were working on a new build of three terraced houses, when they gained unrestricted access to a timber joisted floor. The floor collapsed. Two of the four workers managed to jump off during the collapse whilst the other two fell and suffered serious injuries.

Both employees are still unable to return to full time work. One spent two days in hospital after the incident and the other is still recovering from his injuries; it is not clear whether or not his injury will be life changing.

Investigating, the HSE found that the Principal Contractor, S McMurray Ltd, had failed to safely install joist hangers correctly. There was no other structural support arrangement in place, such as propping the first floor from underneath. The floor was also overloaded with blockwork.